They say that two negatives equal a positive—and this is true—but these two naysayers equal nothing but trouble for your sentences.  They are the Double Negative Team, and these two troublesome twins are always trying to trick you into making a gigantic grammar mistake. 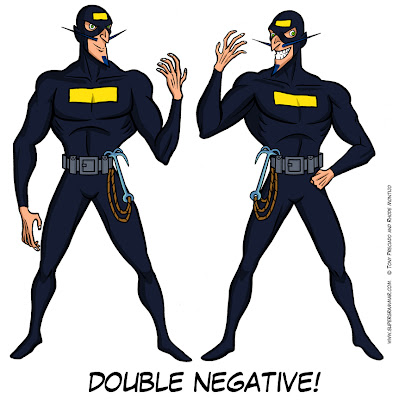 One negative word in a sentence is fine, but if the Double Negative Team gets you to use two negative words in the same sentence then they’ve succeeded in tricking you into saying the exact opposite of what you mean.

It’s a very sneaky trick, and it’s not always easy to catch, especially if you’re not prepared for it.  So, learn to recognize negative words, and the next time you see two of them in the same sentence—think twice.  It just might be the Double Negative Team trying to trick you with their double dealing double talk!

EVIL POWERS:
By tricking you into using two negative words in the same sentence, The Double Negative Team has the power to make you say the exact opposite of what you mean.
SUPER EXAMPLES:

Double negative: if you’re not no superhero, then you must be a superhero

You’re not a superhero.

Fixed: by removing the second negative, no

Double negative: if you can’t never stop me, then you can stop me

You can’t stop me.

I don’t want anybody to get hurt.

Fixed: by changing the second negative word, nobody, into a positive word, anybody

#4)
I don’t know nothing about a robbery.

I don’t know anything about a robbery.

Fixed: by changing the second negative word, nothing, into a positive word, anything 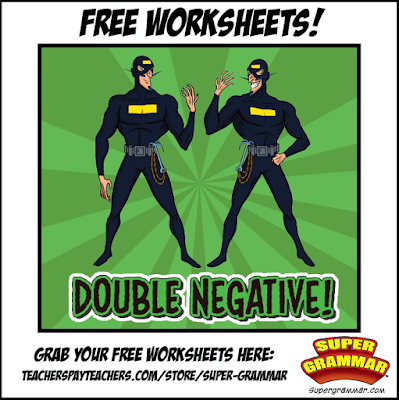 STOPPING THE DOUBLE NEGATIVE TEAM:
Learn to recognize negative words and always watch out for more than one negative word in a sentence.  If you can do that, you’ll always win against the Double Negative Team. 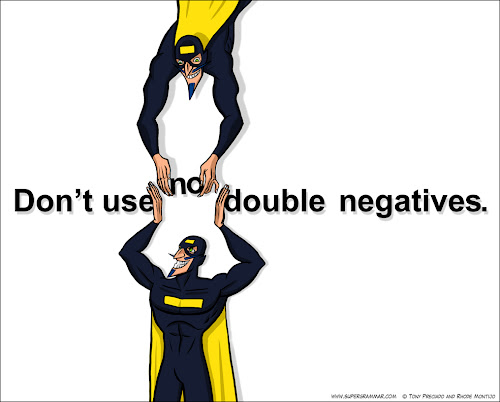 No, not, never, none, nothing, no-one, nobody, nowhere, neither, don’t, can’t, cannot, won’t,  wouldn’t, shouldn’t, couldn’t, isn’t, wasn’t—these are all negative words.

Negative words are simply the opposite of positive words (yes, is, can, do, always…).

Negative words, on their own, are not bad or evil; in fact, you can use negative words to help you say a lot of very positive and useful things, like “No swimming in the piranha tank.”, “Don’t forget to fight crime today.” and “Never surrender without a fight!”  Without negative words, we couldn’t say any of these things, and that would, very positively, be a shame.

Here's a peek at an early concept drawings for Double Negative.  This sketch turned into the inspiration for the final look of the troublesome twin brothers. 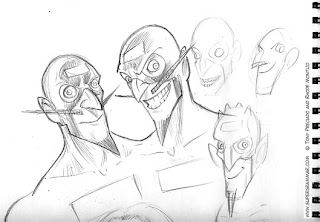 Posted by Super Grammar at 1:40 AM