The Quotation Marks are members of the Super Symbols (A.K.A. punctuation), and as the guardians of direct quotes, our heroes are sworn to protect and preserve the accuracy, correctness, and integrity of any text that is in their care. 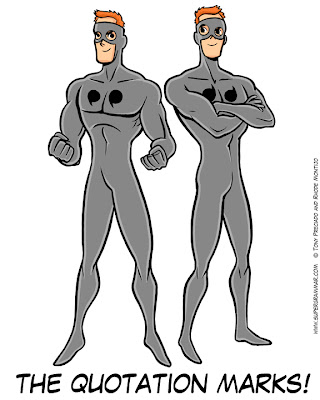 
Now keep in mind, good citizen, that when you quote someone, you’re responsible for repeating exactly what that person actually wrote or said—honest and true—and word for word.  This is a high standard to live up to, but being honest, truthful, and correct is always something worth fighting for.  And in the end, your sentences, and your readers, will thank you for it.


Of course, all this talk of truth isn’t to say that The Quotation Marks don’t have a sense of humor, far from it.  You see, these two characters have a second power that lets them add some pretty witty (and sometimes biting) remarks into our sentences.  It’s called The Power of Ironic Quotes, and this power allows The Quotation Marks to ironically twist the meaning of a word (or words) into the opposite of what they truly mean.  Ironic quotation marks are most often used when kidding, joking, or poking fun at something.


Here’s an example: Of course I’ll “surrender” my weapon.  At first glance, it looks like this villain is willing to give up his weapon, but not so fast!  The word—“surrender”—has ironic quotation marks around it, and these quotation marks are meant to imply that the villain is using this word ironically (he really means the opposite: he will not surrender his weapon).  The Power of Ironic Quotes is a sneaky power, but when it’s used correctly, it can really add some “serious” fun into your sentences.


THE QUOTATION MARKS HAVE TWO POWERS:

THE POWER OF DIRECT QUOTES:
This power allows The Quotation Marks to repeat (quote) what someone else has written or said, word for word.

#1)
Captain Cliché said, “You’ll never get away with this."

#2)
“Block the exits,” the chief commanded, “and surround the building.”

#3)
“Prepare for battle!” she exclaimed.

THE POWER OF IRONIC QUOTES:
This power allows The Quotation Marks to ironically twist words into the opposite of what they truly mean.

#1)
This criminal “genius” forgot about the alarm.

ironic quotes: meaning that this criminal is no genius.

#3)
Your “foolproof” plan has failed again.

ironic quotes: meaning that the plan was not foolproof.
Posted by Super Grammar at 12:39 PM 4 comments:

Just between us, The Parentheses are the very best at sneaking secret messages into your sentences (pretty cool, right?). 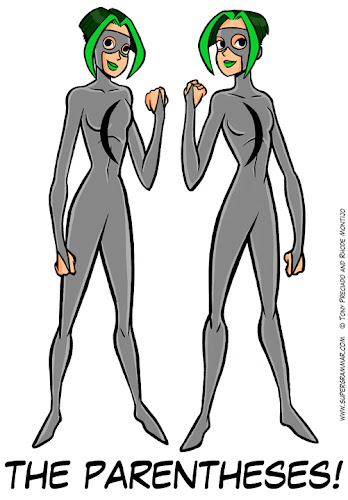