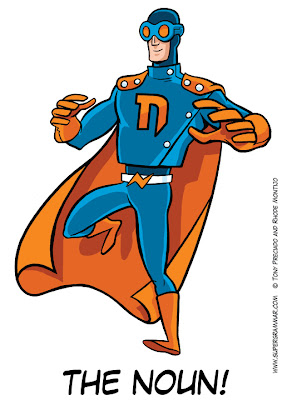 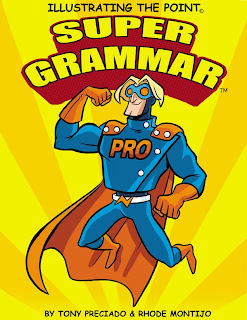 Super Grammar is a book project that we've been working on for quite some time now, and we're really excited to finally share our work with you!

We’ll be posting the strongest and bravest character designs of our grammar based superheroes and supervillains.  We’ll also be posting example sentences, explanations of super powers, and miscellaneous pieces of book related artwork.  For a complete explanation of Super Grammar, be sure to click on the ABOUT: SUPER GRAMMAR tab which is located on the menu bar above.

Also, as we post each of our characters, be sure to check back on them from time to time because we'll be updating our original posts whenever we have anything new or relevant to add to them.  Our next post will be starting things off with the first of our characters.

Thanks for stopping in on us, and we hope you enjoy the characters and our new super powered version of English grammar.

Posted by Super Grammar at 3:52 PM No comments: