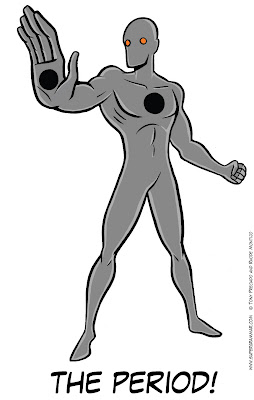 The Period is a member of the super-team called The Super Symbols.  He's one of the smallest symbols which you'll ever see in a sentence, but this pint-sized punctuation can stop any sentence of any size without ever breaking a sweat.  This hero is also known for getting the job done with no fuss, no grandstanding, and with no questions asked.  If you see The Period, you’ll know without a doubt that the sentence you’re reading has ended.

SUPER POWERS:
As a member of The Sentence Ending Team, The Period can stop any sentence of any size, and he lets the reader know that the sentence has come to a full stop.

I’ll stop him from breaking the law, and I’ll bring him to justice.

I’ll stop him from breaking the law, and I’ll bring him to justice because, as this city’s most diligent crime fighter, it’s my self-imposed and sworn duty to boldly stand against tyranny, corruption, and all other forms of unspeakable evils which threaten to shatter the delicate balance of peace and order, but first, I’m going to need a bowling ball, two banana peels, and a net.

And thankfully, The Period can end very long sentences too.

No matter how short, sensible, or ridiculously long a sentence is, The Period can make it stop.
Posted by Super Grammar at 6:37 PM